Bratislava, a former celtic settlement built on the bank of the Danube was one of the most important cities of the Hungarian Empire and for 200 years the coronation place of Hungarian kings. Nowadays, being the capital of the Slovak republic with approximately 420,000 inhabitants, is a city full of art and cultural events, rich history and stunning monuments. This city has been writing the history since it was established in the 13th century.

One of the youngest European capitals and the city with history stretching 2,000 years to the past. In the Celtic ages, actually in 2nd century BC (the first written record comes from this time), the Celtic nation of Boii came to this place and built a strategic fundament. The settlement has soon become famous for a mint – it minted the famous golden and silver coins – BIATEC. Before Slovakia started using EURO, the motive of the Biatec had been used for the 5-koruna coin and the sculpture of it stands in front of the National Bank of Slovakia.

Later, in the times of the great Roman Empire, Bratislava stood at the LIMES ROMANUS – the  border which separated the Roman Empire from the Barbarians. GERULATA - the remains of the Roman military camp come from these ages which can be found in Rusovce, one of the parts of Bratislava. It was built in the 2nd century. Nowadays the remains were reconstructed and you can visit the exposition of the Roman artefacts discovered in Slovakia in the area of the Gerulata.

After the Slavic tribes moved to the Carpathian basin the area of Bratislava became one of their important settlements. Later it became the part of the Great Moravian empire.

After the old Magyars had concurred the area of the Carpathian basin, the area of Slovakia became an integral part of the Hungarian monarchy for almost 1000 years. Bratislava was one of the cities with crucial importance. The first university of the empire Academia Istroplitana had been established in Bratislava in the 15th century. Bratislava was also the capital and the coronation place of the Hungarian monarchy for almost 200 years. After the collapse of the empire in 1918 Bratislava became the capital of Slovakia.

Bratislava has a lot of interesting monuments and sites to be seen. The castle, the Old Town and its monuments, the Opera and also the modern shopping malls make Bratislava a very attractive destination for travellers.

The castle is an ensemble of several buildings, the greatest dominant is the palace standing on the top of the hill, above the city. You can enjoy the great view mainly to the largest “socialist” neighbourhood unit of Slovakia, Petržalka, but also other parts of the city.

In the Old town you can find several interesting monuments: Gothic cathedral of St. Martin, Michael's gate, Old-town square with the town hall, Primate Palace (the Peace with Pressburg was signed here with Napoleon in 1805) and the famous old Opera house. Remeber, there is a reason Bratislava is called "The Beauty on Danube". 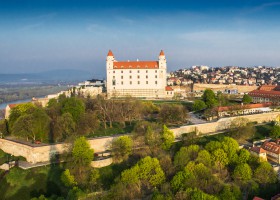